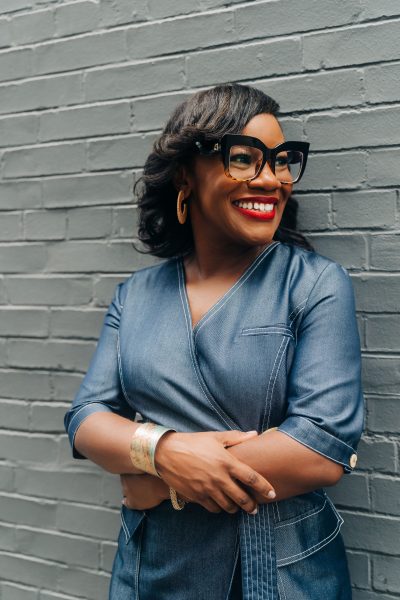 Kimberly Seals Allers is an award-winning journalist, five-time author, international speaker and strategist for maternal and infant health. A former senior editor at ESSENCE and writer at FORTUNE magazine, Kimberly is a leading voice on birth, breastfeeding and motherhood at the intersection of race, class and policy. She is the founder of Irth, (as in Birth but without the B for bias), the first-of-its-kind “Yelp-like” re- view and rating app for Black and brown women and birthing people to leave and find reviews of Ob/GYNs, hospitals, and pediatricians as a digital tool to address bias and racism in care and bring trans- parency and accountability to the medical system.
With funding from the California Health Care Foundation, Kimberly launched Birthright— a podcast about joy and healing in Black birth to counter the doom and gloom mainstream narrative in Black mater- nal health. Kimberly’s fifth book, The Big Let Down—How Medicine, Big Business and Feminism Undermine Breastfeeding was published by St. Martin’s Press in 2017. Irth, is a project of Kimberly’s non-profit, Narrative Nation, which creates community-centered media and tech to eradicate health disparities. Kimberly raised over $600,000 in grants to develop Irth with an all
women of color team and it is now available in the Google Play and Apple app stores.
A frequent contributor to The New York Times and Washington Post, HuffPost, Slate and others, Kimberly was named one of “21 Leaders for the 21st Century” by Women’s eNews for her media ad- vocacy work in maternal and infant health. As a consultant, Kimberly creates narrative strategies for non-profit organizations and for-profit brands that serve mothers and babies, with an expertise in engaging communities of color.
For nearly a decade, Kimberly has created and directed innovative community-partnered projects in New Orleans, Birmingham, Detroit and Philadelphia, among other cities, working to improve birth, breastfeeding, and maternal health outcomes. She recently served as editorial director of the Mater- nal and Child Health Communication Collective, a national consortium of over 80 organizations, working to shift the narrative of maternal and infant health, funded by the W.K.Kellogg Foundation.
Kimberly is also the author of The Mocha Manual series of books, published by HarperCollins (2006- 2009) and founded an award-winning pregnancy and parenting destination for Black parents in 2007. Her first book, The Mocha Manual to a Fabulous Pregnancy was nominated for a NAACP Im- age Award and turned into a DVD sold at Wal-mart. The Mocha Manual to Turning Your Passion into Profit and The Mocha Manual to Military Life round out the top-selling series.
Kimberly has appeared on Good Morning America, CNN, Anderson Cooper, the Tom Joyner Morning Show, Fox News and has been featured in various international and national media outlets, including the British Medical Journal, The Guardian (U.K.), Essence, Pregnancy and in various online media.
Kimberly is a graduate of NYU and Columbia University Graduate School of Journalism. A divorced mother of two, she lives in Queens, NY. Follow her on Facebook, Twitter and Instagram: @iamK- SealsAllers. Learn more at www.KimberlySealsAllers.com , www.IrthApp.com and www.Birthright– Podcast.com. Follow @theIrthApp on Instagram, Twitter and Facebook.