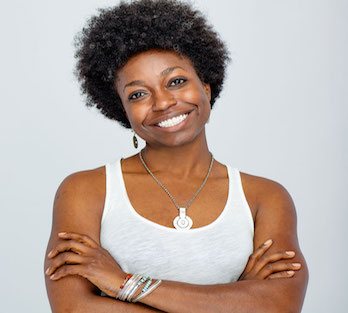 Elizabeth Bayne is an award-winning filmmaker with a focus on social impact producing. She is committed to using film to tell unexplored narratives that promote health,environmental and social justice issues in underserved communities.

Elizabeth was born in Washington, D.C. and raised three hours south in Hampton Roads, VA – the home of NASA and Langley Air Force Base. In this environment, she longed to incorporate her love of art with her interests in science. But it wasn’t until after college that she got her first exposure to the motion picture industry when a fellowship with the U.S. Environmental Protection Agency brought her to Los Angeles to watch Joe Pytka direct a PSA for the agency. She immediately fell in love with the medium, moved to Los Angeles and enrolled in film school.

With an MPH from Yale and MFA from the ArtCenter College of Design, Elizabeth successfully bridged the worlds of art and science to produce content for clients including MIT Media Lab, the USC Viterbi School of Engineering, the LA County Department of Public Health, and A.U.M. Films and Media. Her PSAs, documentary and narrative projects have appeared on ABC, the Smithsonian Channel and Aspire TV.

Elizabeth is currently in post-production on two grant-funded documentaries slated for 2020.