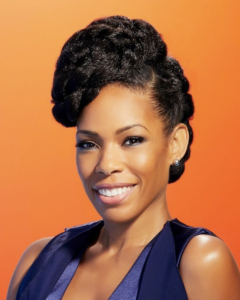 Angela Lewis was born and raised in Detroit, Michigan, and received her BFA in acting from the University of Michigan.
She began her professional career in New York, finding her way and eventually carving a path for herself as a premier theater actress, pioneering new plays, created by some of American theater’s most brilliant artistic leaders.
Eventually making her way to Los Angeles, Ms. Lewis has found bounteous success across industry sectors, including commercial (on camera and  voice over), animation, audio books, film and television.
Currently, Angela stars as Aunt Louie in the late great, John Singleton’s legacy series & FX’s highest rated show of all time, Snowfall. From the pilot to it’s fifth season and into it’s upcoming series finale season, Angela has curated ‘Aunt Louie’ into a legendary character, and is positioning herself as a budding cultural icon.
In addition to acting, Angela is co-founder of the newly formed BlüRemedi, a company that creates, develops, and produces fresh, high caliber, and dynamic content, redefining cultural norms by illuminating the vast diversity within diversity.
Committed to giving back and the uplifting of black (and brown) people, Angela has also co-founded the non-profit organization Moon Child Collaborative, which houses its first initiative, Angela’s own labour of love – Birth Village.
Since becoming a mother to her first child in 2019, Angela has been inspired to use her platform for the annihilation of the black maternal health crisis by raising awareness, educating, advocating, and providing access to resources for black (and of color) women, families, and workers in the birth space.
Angela’s desire is to live fully in her power by alchemizing her passion for exploring humanity through the arts, standing in the fullness of the light and love that is her core, carving out a legacy for herself as an actress, writer, producer (and the boundless gifts waiting to reveal themselves), and glowing in the fullness of her womanhood, through which her family grows and thrives, and the world becomes a better place.